Hapé – pronounced ha-PAY and also known as rapé, rapeh, or hapeh, – is a preparation of powdered medicinal herbs, often with a tobacco base, that is taken through the nose. This practice of consuming powdered plant medicines through the nose is pre-Columbian and was first observed among the Brazilian indigenous tribes.

In Europe, herbal snuff was introduced by the doctor and botanist Francisco Hernández de Boncalo in 1577 and the elites often took snuff as a headache treatment. During the 18th century inhaling snuff became fashionable among the European aristocracy.

Today, indigenous tribes in the Amazon basin continue to use hapé in all aspects of life, from formal ritual use in rites of puberty, initiation, cashiri drinkings festivals, social gatherings and healing ceremonies, to simply tuning into Nature and the healing power of sacred plant medicines alone or with friends. Haru Kuntanawa blowing hapé into the nose of another shaman.

The Katukina, Yawanawa, Kaxinawa, Nukini, Kuntanawa, Apurina, Ashaninka, and Matses produce their own specific kinds of hapé blends and have different ways of preparing the herbal snuff, different techniques of administering it, and different songs that are sung during the hapé rituals.

The ritual use of hapé is also making its way around the world, introduced to the West through ayahuasca ceremonies by traveling shamans and by visitors who have spent time in the jungle with the Indians.

From the indigenous point of view, hapé is a sacred shamanic snuff medicine with profound healing effects. Hapé is made from different medicinal plants for different purposes – to induce visions, to have energy, to enhance the senses with the aromatic fragrance of the plants used in the blend.

Given that there are myriad medicinal plants you can blend into hapé, there are as many hapé recipes in existence, and these recipes are often closely guarded by the tribes.

Sharing hapé – or “passando rapé” – is a traditionally a ritualistic practice among the Indians that may include specific chants to activate the force of the hapé and to confer the healing power of the forest upon the hapé recipient.

In the video below, you can hear a traditional chant being chanted by Huni Kui shaman Ninawa Pai da Mata, as various people receive hapé at a gathering hosted by the Kuntanawa tribe.

The Art of Making Sacred Hapé

It’s a laborious process to make hapé, and hapé production is typically done in a ceremonial context, from gathering the sacred plants to cooking and processing the medicine. Traditionally, the person making the hapé blend needs to be an experienced shaman with thorough knowledge about the medicinal plants of the forest.

In addition to having broad knowledge of the medicinal plants of the Amazon rainforest – one of the most biodiverse regions in the world – the shaman also needs to know precisely which part of each plant can be used. For example, the root bark of a plant can have a different purpose and effect than the leaves or the seeds of the same plant. Tobacco is frequently used as a base for medicinal hapé.

This sacred preparation of medicinal hapé is a process that may take weeks. Usually, the shaman of the tribe – the Pajé – works under a strict diet and in a trance-state when endlessly pounding and mixing the hapé herbs.

The other members of the tribe are responsible for the collection of hapé plants. The plants will either be sun-dried or roasted and are filtered several times through a fine cloth and then mixed with other ingredients to obtain the final batch. In earlier times, the Pajé used the final batch in a ceremony on his own. Nowadays, the whole tribe takes part in this magical ceremonial event. Only recently, the tribes share their sacred medicine with foreign friends, passing on the knowledge and application for the next generations. Still, many of the blend compositions remain a secret of the tribe.

The Healing Properties of Medicinal Hapé

Hapé can be mixed also with other mind altering plants, like coca, jurema, or yopo and can potentiate the healing capacity of other plants, like ayahuasca. Furthermore, hapé helps releasing emotional, physical, and spiritual illnesses and eases negativity and confusion, enabling a thorough grounding of the mind.

Likewise, shamans use hapé to re-align with their energy channels and with their higher self, and to intensify their connection with the world and the universe. In addition, hapé paves the way to detoxify the body and cleans out all excessive mucus, toxins and bacteria. Green hapé from the Apuriná tribe is highly stimulating, but doesn’t contain tobacco.

Medicinal hapé is also used as a cure for certain diseases, sores, wounds, and as a defense against insects and also as an analgesic and narcotic substance that eases fatigue, pain, hunger, and thirst. There are even special hapé blends that are made to counteract influenza and other diseases.

Tobacco-based hapé contains nicotine, so its use increases the brain blood flow and affects the release of several stimulatory neurotransmitter leading to antidepressant and stimulatory effects – thereby heightening your focus, presence, and intuition and opening the body to higher communication and holistic thinking and understanding.

The art of making hapé has been passed onto non-indigenous people, so that you can even find hapé-making enthusiasts and groups in parts of Brazil outside the Amazon. The use of hapé has also been adopted by the Santo Daime communities as well. Outside of Brazil, hapé is often offered by Western facilitators of ayahuasca ceremonies.

While there is a great deal of debate among the tribes and between the elders and younger generation over the extent that this knowledge ought to be shared with outsiders, appreciation of the sacred art of making and taking hapé is growing in the global shamanic community.

For detailed, step-by-step instructions on how to administer shamanic snuff ceremonially, check out this Master Class with Brazilian medicine priestess Aluna Lua: 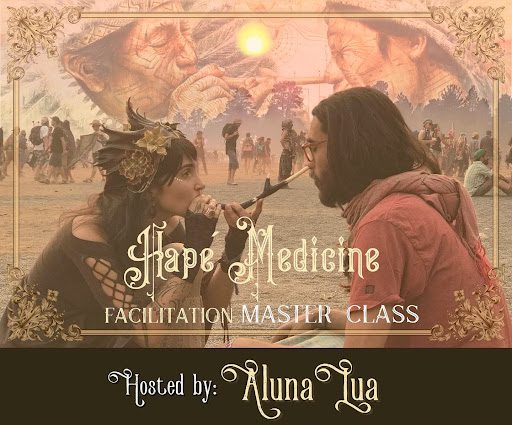 Deepen your alliance with the Tobacco Master Plant & enhance your shamanic faciliation skills. Sign up and:

Check out these Huni Kuin hapé blends you can order online!